This article is a stub. You can help Questionable Content Wiki by expanding it.

Male
Steve is Marten's best male friend, an old college buddy.[1] He formerly dated Sara, Ellen, Tortura,[2] and Meena but now has a relationship with Cosette. During a long period in which Steve was absent from the comic it was eventually shown that he became a secret agent[3] and grew a beard. He has since returned to normal life.[4]

His age was given as 24[5] earlier in the strip, when he was dating Ellen.

Despite having been a character in the comic since the beginning, Steve is the only main character with a last name who has not had it revealed.

Steve works at a "nondescript office job"[6] when he's not being a secret agent. He has stated that he very much prefers this job to being a field agent.[4]

Steve was depressed after his break up with Ellen[6]. Marten introduced him to Penelope Gaines, a new Coffee of Doom employee at the time.[7] Steve was oblivious to her flirting and left the coffee-shop; on his way to a grocery store he met Meena.[8] After Meena forced him to give her his number without even telling him her name, Steve talked to Marten, who reminded him that he shot down Penny.[9]

Marten gave Steve's number to Cosette.[10] After Cosette fails to call him,[11] Tai Hubbert helps him to find out her full name. They finally meet when Steve leaves the dormitory.[12] Their first date is interrupted by a fire alarm.[13]

Tortura had visited Steve and Cosette.[14]

Steve is exclusively heterosexual but is known to have once used full tongue on Marten on a dare while drunk.[16] There are some hints that there's more to him.[17]

Steve drinks alcohol, sometimes to the point of binging,[18][19] but has never been seen using anything else. He is particularly susceptible to drunk online shopping. Breaking up with Ellen lead him to buy five hundred dollars worth of fantasy knives.[20][21] After a calm buddy night at the bar with Marten turned into a big party, Steve drunk bought a boat.[22]

Steve's father has been married three or four times.[29] Steve's fear of commitment[30] might stem from family issues.

Steve as he appeared from Comic 3-93 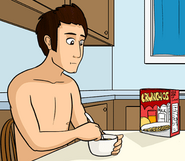 Steve eating cereal in Number 2407: You Needed To Know

Community content is available under CC-BY-SA unless otherwise noted.