Robots are sentient AIs. They usually possess a chassis, often a humanoid one. In earlier strips, before singularity in the Questionable Content universe, they were referred to as AnthroPCs. AnthroPC was described as a "sentient mobile workstation".

Later on, the comic shifted towards AIs being fully independent persons. Robots have various chassis, majority of which are humanoid. Robots in the QC universe are fully sentient, they express self-awareness, emotions, and other sentience-related traits.

Some robots work to support themselves financially. Some live alone, while others live with human companions.

AnthroPCs were invented by using a combination of nonsentient hardware and software which exhibited the emergent property of intelligence.[1] Their intelligence lies in their software, since they continue to converse and maintain their personalities when backed up to a desktop computer.[2] AnthorPCs are a self-propelled artificially intelligent computer. AnthroPCs are used for companionship, media storage and playback, Internet access, and security.

AnthroPCs use the vast majority of their processing power towards maintaining their sentience; the signal pathways may be more efficient than human neurology, but the temporal experience isn't noticeably different.[3]

AI's differ from AnthroPC's in that they don't think the same way that humans nor AnthroPCs do. Momo explains: "When you receive trillions of inputs at once, there is no way to translate that kind of processing into human thought patterns. Thinking on a human level is just another subroutine for them. Why should it be frustrating, when the bulk of their attention is directed elsewhere?"[3]

There appears to be a continuity error relating to AIs and AnthroPCs. In Number 1010: 101010101, Hanners receives a humanoid robot from her father, which seems to be a surprise to all concerned, although Pintsize and Winslow are well known to all. Pintsize subsequently tells an anecdote involving being bought from the Idoru outlet, staffed by the same robot saleswoman who appears later. Momo's first appearance appears to be a surprise, yet the various staff at the Idoru outlet have assorted back-stories indicating they have been around for some time in that role.

In Number 1777: And Then Nothing Turned Itself Inside Out the singularity happened in the Questionable Content universe. After that, the AnthroPCs were effectively retconned to be fully fledged AIs. They inhabit different bodies, from toasters to space stations, but most characters appear in humanoid bodies.

Clinton Augustus told the story of "The Gary Phenomenon"—which may (or may not) be an apocryphal tale of a AI within the QC universe.[5]

AnthroPCs can have human-like personalities which vary widely depending on operating system and life experience, and to some extent on the amount of RAM installed.[6] They are not subject to any version of the Three Laws of Robotics and have complete free will[7]. As a result they are frequently troublesome to operate.[8][9] Perhaps for this reason, nobody seen or mentioned in the strip has more than one AnthroPC, except institutions.

Their free will is influenced by a genuine liking for humans and by the threat of robot jail.[10]

AnthroPCs seem to get along well with each other when they socialize.[11]

The cheapest and most common form factor looks like Pintsize, though other chassis configurations are possible and in use. Chassis prices in the civilian market can range from two hundred dollars for a basic unit[12] to thirty thousand for a luxury model.[13] Remarkably, their hardware configuration can be controlled by firmware updates.[14]

Full-sized humanoid bodies used to be uncommon and strange looking[15] but are now off-the-shelf items[16] which can be mistaken for humans.[17] Fujitsu has even experimented with adding genitalia, though not quite human-standard.[12]

Humanoid bodies are covered with a synthetic skin which in higher-end models has enough stretch and give to avoid having visible joints[18] and have hair made of synthetic fiber[19] which glows when an AnthroPC personality is installed.[20] However Momo has visible joints, despite being a high-end model chassis, as do the sales staff at Idoru.

Other chassis types include:

Their emotions include anger[24] and fear of abandonment[25][16] and religious feelings[26] at least in some, but which do not take the doctrinal form common in humans.[7] They seem to have genuine interest in and affection for humans.

For unknown reasons, AnthroPCs have libidos.[27] Their gender is a software configuration option with three possible settings.[28] They can use packet exchange as a substitute for physical intimacy in any gender combination.[29]

AnthroPCs and other AI in general have the ability to experience intoxication through several methods, such as emulation[30], abusing video drivers[31], or by intentionally downcycling their processors[32].

Although Jeph started out with AnthroPC's being just a talking a computer with arms and legs, with introduction of humanoid robots and other AIs, the terminology used in the comic gradually shifted to using the terms "AI" and "robot" almost exclusively.

Originally, companion AnthroPCs were described as a "friend"[33] and were subject to discipline like children.[34]

In the past they could be bought and sold and were subject to hardware modification without their permission,[35][36] suggesting that they were legally considered property at one point. Government agents could even destroy them without legal process.[33]

There was a compatibility test that was usually administered by a company known as AnthroPC Companion Connections ("Your Friend in Robotics!").[37] Even though the questionnaire was supposedly over 99% accurate,[38] mistakes were possible.[39]

They are still (in some cases) treated like pets in that landlords require an additional damage deposit from renters who own AnthroPCs,[40] and Faye once called Pintsize a "pet robot".[41]

Property or not, abuse of them was frowned on at least by some.[42]

AnthroPCs themselves were ambivalent about getting full civil rights.[43]

AnthroPCs in the comic have changed since Singularity hit[44]—but not like some of them expected.[45]

A recent Constitutional amendment in the QC-verse now guarantees them equal rights to humans.[46] This apparently happened after the Singularity "hit" but was being advocated by thoughtful humans before then.[47]

As of the current strip, they have property rights to the chassis they inhabit.[48] Previously, they would ask permission before getting a firmware upgrade.[14]

They can hold jobs,[49] and even before the amendment, they could own money.[50][51] AnthroPCs have not (yet) taken over the job market from humans, mostly because many replace non-sentient machines - and others are just lazy.[52]

AnthroPCs can at least in some ways be treated like underage humans if they score too low on a maturity test, Turing-Diaz Questionnaire 7B.[53]

Momo explains in this strip the basics of AnthroPC/Human relationships works:

"You go to a certified matchmaking service. They introduce you to potential companion AIs, and if you get along and pass the background checks, you sign the contract. Either party can choose to end the relationship at any time, without penalty. But in an ideal situation, the contract is merely a formality. A true friendship forms, and everything works out... Companion AIs are the ambassadors of our kind. We foster understanding and acceptance between humans and AIs. I cannot think of a more noble calling."[54]

"Artificial intelligences are created in a virtual environment, where they are stored in a "creche" of other AIs in their generation. When bootstrapped to self-awareness, they are given a choice of function- commercial use (AnthroPCs), military, scientific, etc, or allowed to subsume in the global meta-AI. If they choose to go into "retail" they are allowed to choose a self-identity and are shipped to a reputable "dealer" (such as Idoru, in today's strip) where they are put up for "sale."[16]

Purchase of an AI is not a binding contract- either party is free to terminate the relationship at any time, and the transaction agent will refund the contract fee. The use of terms like "sale" and "owner" are considered offensive by some, and are becoming rather politically incorrect (my use of them here is solely for sake of comparison, hence the quotation marks).

One would think that the majority of AIs would choose to simply be given a chassis and left to make their own way in the world, but the majority who do not go into a specialized profession choose to pair up with a human "owner." There has been much speculation by both humans and AIs as to the reason for this- no aspect of their programming indicates a cause for such a bias. The general consensus is that the average AI simply finds your average human entertaining, and enjoys the companionship."

As of #2711, May appears to be equipped with a chassis comparable to the Idoru sales staff, apart from the colour and appears to be acting independently, having approached Dale for accommodation and assistance. It is possible that the coloration of her chassis represents her status as a paroled convict, or is some kind of "standard issue" humanoid chassis given or loaned to AI as part of their reintroduction into society.

From Tumblr, on the "global meta-AI":

"The meta-AI is the closest thing AIs have to a “governing body,” outside of their actual local, state, and national administrations. It’s part democratic polling, part group subconscious, part multiply-parallel linked intelligences. It doesn’t have a consciousness, per se, but it tends to reflect the general will of the artificial population vis. autonomy, development, human relations, etc."[18]

Further Speculation and Opinion about AnthroPCs[]

Humans in the QC universe have had a diverse range of reactions to AnthroPCs. At least one church categorically condemns them, and although that church is largely regarded as crazy,[55] even some people who are enthusiastic about AIs can give too much attention to conspiracy theories.[56]

In a poll about the social and legal status of AnthroPCs on the Questionable Content forum, the poll option with the most votes was: "Stop overanalyzing the joke".[57]

The Apple version of the AnthroPC — Winslow's old chassis 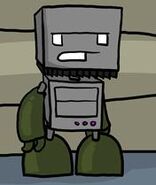 The Base "Idoru" model — Leda

Fans on the QC message board compiled an AnthroPC Handbook, original of which is no longer available, but it has been archived.