Number 46: Hot Topic Is Going To Sue Me

@XxSexyRavenxX
Blodwyn Raven Pritchard, a native of Houston,[1] is an ex-goth[2] friend of Dora's and a junior employee at Coffee of Doom. Although she is energetic and cheerful now, Dora claims that Raven was 20 pounds heavier in college and very depressed.[3]

Raven goes by her middle name as she dislikes her first name, Blodwyn (Welsh for "White Flower").[4] While generally depicted as being somewhat "air-headed", gullible,[5] and oblivious, she has been known to display remarkable intellect and insight at times, and it has even been hinted that her mental "slowness" might just be an act.[6]

One might argue that, whenever she senses her coworkers (especially Faye) to be off-guard, she sometimes displays staggering insight -- only to withdraw in her "cloak of ditziness" as soon as her conversation partner pays attention to what she is actually saying.[7]

Raven is good-hearted, willing to help friends when they need it.[8]

Raven's parents both occupy professions that require a lot of mental capability.[1]

Raven's undergraduate degree is in interior design, a choice which displeased her father.[1] Later on she started pursuing a doctorate in physics while working reduced hours at Coffee of Doom.[9]

Prior to Coffee of Doom, Raven worked at a Wal-Mart[1] and at Hot Topic.[10] She has recently resumed regular employment at Coffee of Doom to pay college bills.[11] Her dream job is to be a waterslide test pilot.[12]

Raven leads an active sex life with multiple partners.[13] She is primarily heterosexual but has been known to make out with a woman[14] and some inconclusive posts on her Twitter feed are consistent with her being bisexual.[15]

Raven drinks alcohol. She has talked about using marijuana.[17]

Raven does not seem particularly concerned with music, especially compared to the other characters. She likes The Killers[18] and has sung a Corey Hart tune[19] without being too clear on his name. She owns a T-shirt for alternative rock band Death Cab For Cutie (DCFC).[20]

She is oriented to mass-market music and doesn't understand the appeal of indie music.[21]

Raven plays Dungeons & Dragons,[22] though she suggests that she does it primarily for the attention and affection she receives from the other (male) players.

Raven has some familiarity with advanced mathematics,[42] but is missing some basic knowledge of how the world works that most people are supposed to pick up in childhood.[42] Her known propensity to change lifestyles drastically makes it plausible that she was doing something altogether different in childhood than we've seen in her adult life. Add these facts to her heredity, and Raven may have been a child prodigy

She may be a little attracted to Jim considering she states that he is "a sexy older man".[43]

Raven in strip Number 46: Hot Topic Is Going To Sue Me, working at Hot Topic

Raven in Number 132: Interrogation–Number 278: We Can Dance If We Want To 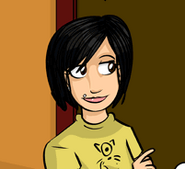