@pintsize0101
Pintsize is Marten's model 8600[2] Windows[3] AnthroPC, and was the second character introduced in the comic's first strip. He is a companion to Marten and frequently used for comic relief, throw-away gags or to add punchlines to a strip. He can often be found with Winslow. He is one of only three characters in the strip to have his own plush version.

This section is a stub. You can help Questionable Content Wiki by expanding it.

Pintsize has had a date with another AnthroPC named awesoemPC1998, until finding out that awesoemPC was actually a male anthroPC who was pink.[8] It is implied that they did something explicit, but it's never revealed what (it was strange enough to shock Pintsize, though).

When Marten met Hannelore Ellicott-Chatham, Pintsize gossiped with Winslow.[9] When Dora and Marten went on their first date, Pintsize, Winslow, and Hanners threw a crazy party.[10]

Installation of additional RAM into Pintsize caused him to talk too fast.[11]

Pintsize has worried that his antics had been becoming too predictable.[14]

He discusses his work as Marten's companion with Momo in Number 2332: Insider Talk. As it turned out, Pinsize's pairing with Marten might have been skewed by Marten had being scared of Gordon during his application at "AnthroPC Companion Connections".[18]

Pintsize promised not to harass Claire after Marten loomed over him.[19]

Pintsize and Claire get into an argument about the prospects of robots wanting organic bodies and the fact that Claire is trans.[21]

Pintsize disclosed some insecurities about his size to Bubbles when they met[22].

He once got stuck in Claire's hair by accident.[23]

When Claire was stressing out about her exams, Pintsize guided Marten to talk to her about it using Ursula.[24] He then discussed this deviation from his usual antics with Momo and May.[25]

Pintsize met Sam, when she needed to get emergency shorts for Millefeuille.[28]

Pintsize and Marten meet Willow Dragonfang after she crashes her RC quadcopter into Marten's head.[32]

Pintsize is mischievous[33] but loyal.[34] Most of his hijinks are sexual in nature, such as forming his own Monopoly board out of the contents of Faye's underwear drawer.[35] or trying to "comfort" Faye after her falling out with Sven.[36] It is possible that his offensive pranks are miscalculation,[37] but some are downright alarming.[38]

Pintsize is foul-mouthed, using both human and robot[39] profanity.

Despite his deviant nature, Pintsize can be kind-hearted.[40] This is perhaps the only trait he shares with Marten. It has been suggested that the companion AI broker who paired them up made a mistake.[41]

When it is absolutely necessary to keep Pintsize under control, he can be immobilized with duct tape.

Pintsize keeps a wide variety of costumes on hand which he wears to be humorous or weird.[42][43]

Pintsize is the audience's favorite AnthroPC by a narrow margin. He beat Winslow and Momo by one vote in a poll on the Questionable Content forum.[44]

Pintsize spends his spare time collecting pornography[45][46] and running the SETI screensaver.[47] He occasionally calculates prime numbers, but this is less common. He uses his twitter account to post disgusting, horrific, or otherwise bizarre sex drawings.

When with other AnthroPCs, he participates in role-playing games.[48]

Pintsize is configured in software as a male and seeks out female-configured AnthroPCs for cybersex.[49] He has frequently made (crude) advances to humans, always women, making him a heterosexual. To please them he has a vibration mode.[50]

He tried to console Marten after his breakup with Dora using a fleshlight glued onto his chassis.[51]

Pintsize has attempted to copulate with Coffee of Doom's espresso machine.[52]

He once tried facesitting with May, but was disappointed, as it "doesn't feel very transgressive".[53]

Pintsize appears to have a toast fetish.[54] He created a profile on a dating site Computr, describing his interest to "shoot toast at your body".[1] He matched with Roko Basilisk because of her bread fetish.[55] The date didn't go as well as he wanted, because Roko didn't enjoy toast being launched at her during dinner.[56]

Pintsize is not comfortable being identified as part of the anti-analingus group.[58]

Pintsize is not a frequent drug user but has gotten stoned on video drivers[59] and hallucinated on virtual peyote.[60]

Pintsize is difficult to use for media playback because he insists instead on loudly yelling the lyrics to "Crazy Train," which is (in his words) "the best song ever".[61] He considers Toto's best song to be "Hold the Line".[62] When considering forming a sovereign nation of copies of himself, he chose Björk's "Army of Me" as the national anthem.[63]

Pintsize is equipped with a M31 Combat Chassis with 512 MB of RAM,[64], an optical drive,[65], USB,[66] DVI,[67] Ethernet,[68] and wireless[47] network interfaces, spectrometer in his mouth with which he tastes things[69] LASER weapon (formerly) and suction cup feet,[70] but does not have a built-in camera.[citation needed] The spectrometer and associated holding tank were described as new features, implying that they were part of the M-31 chassis and not part of the stock one.[citation needed]

The spectrometer seems to be a seldom-encountered accessory. Even Momo's high-end chassis has no chemosensor[71] and AnthroPC enthusiast Marigold was confused to hear an AnthroPC describing smells.[72]

The M-31 chassis is easy to repair,[73] which is handy since he lives with Faye. It also seems to grant him a high amount of resistance to cold weather, as he was able to easily function in cold that caused Winslow's Apple chassis to lock up completely. He is however powerless against duct tape, which is occasionally used to restrain him & prevent further pranks/damages.

Pintsize's new chassis is not military-grade like his old one[74], and it has a "USB port where a human's junk would be."[75]

One open and obvious question is how Pintsize got the way he is. There have been some interesting ideas about this on the forum.

One suggestion, from jwhouk, is that Pintsize was originally Marten's mom's AnthroPC.[105] This theory is debunked in the mini-arc starting from Number 2331: Not Rhetorical

And then there's the Stanford buttock-touching robot.[107] 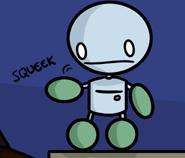 Pintsize with a laser in Number 61: I Am Your Father

Pintsize is made king of the AnthroPCs in Number 124: Sudden Interruption

Pintsize discusses his relationship with Marten in Number 1899: Grading On A Curve