@marigoldfarmer
Marigold Louise Farmer[3] was the roommate of Angus. She is the human companion and best friend[4] of Momo. Before she met Marten, Dora and Hannelore she was a recluse with bad hygiene who only played MMOs, read manga and watched anime. However, her social life and personal hygiene have improved since her introduction, evident by her more frequent appearance outside of her apartment and her clearer complexion.

Marigold meets Marten and Dora when they bring Pintsize to Marigold in the hopes that she can fix a rewiring job that Pintsize did to himself at the suggestion of PT410X.[7] She initially protests, before Momo convinces her to fix Pintsize. As payment for her services, Dora calls Hannelore and convinces her to clean Marigold's very messy[8] room.

Marigold lives at 14 Elm Grove Lane, Apartment 8 in Northampton.[9] The apartment number may also be something beginning with "22".[10][11]

Marigold earns money maintaining[12] her high-strung[13] father's shoe sales web site.[14] It is unclear whether she has other income. Jeph Jacques said on Formspring that her living is "server maintenance". It would be possible for her to earn income doing AnthroPC repair, a field in which she has expertise.[15]

Marigold attended college with Angus,[16] but her major is unknown. When he moves into Northampton, they rent an apartment together.[17] In her earlier schooling she was verbally[17] and physically[18][19] abused.

With the help of Momo, Marigold initiates her friendship with Hanners[20] and Marten.[21]

After becoming friends with Marten and Co.[22][23][24] Marigold develops a crush on Angus, her roommate.[25] When she tries to kiss Angus,[26] he stops her, stating that he only likes her as a friend, which causes her to run off crying and spiral into a deep depression. After long periods of refusing to eat or leave her room, she eventually got back to normal. Later, Angus and Marigold reconcile and talk about her crush.[27] Although Marigold has been very distraught after learning about Angus and Faye,[28] Dora calms her down.[29]

While visiting Hannelore's Space Station, Marigold has an amusing set of romantic encounters with a handsome yet awkward young scientist named Francis York, who is undeniably attracted to her.[34] Space Station and Hannelore give Marigold some advice.[35] She nearly ruines her chances with him by almost vomiting on him due to zero-g sickness.[36] The next morning, the two still show intense interest in each other and share a passionate embrace and kiss[37] before being unintentionally interrupted by Hannelore and Marten.[38]

Although Marigold initially denies interest in Dale, other characters note that their long-standing antagonistic encounters seem to hold flirtatious undertones.[31][39] Momo in particular is adamant about having the two become friends. She invites Dale and Marigold out to share a meal together in a diner, but the two had a misunderstanding when, upon returning from the restroom with Momo, they found their table empty. Marigold assumes that Dale had rudely abandoned them.[40] They later clear up this misunderstanding when Momo once again attempts to have them patch things up.[41] This time with colorful assistance from Dale's temporary and crass virtual AI companion, May.

After Dale apologizes for his behavior concerning World of Warcraft and explains that he has a hard time talking to girls, he and Marigold settle their differences and agree to hang out and watch anime together. During an awkward evening watching anime, Marigold and Dale each admit that they found the other attractive, though Dale has to leave before anything further happens.[11]

With assistance from Hannelore,[42] Dale and Marigold meet again, and kiss each other.[43] The kiss freaks Marigold out, and when Momo tries to reassure her, Marigold inadvertently reproaches Momo with the debt for her new body.[44] They reconcile the following day.[45]

Momo's nudges lead Marigold to ask Dale out.[46] But once Dale arrives, he is informed by Momo that Marigold has accidentally over-medicated to combat nervousness,[47] leading her to sleep through the night. Dale and Momo watch movies, and Dale makes pancakes in the morning.[48] Seeing how understanding Dale had been about her antihistamine screw-up, Marigold drags Dale to her bedroom.[49] Afterward, Marigold questions her self-control and decency to Momo.[50]

Marigold is jealous when she finds out that Dale and Emily have sometimes been working on the same shift in Coffee of Doom.[51] May and Momo again helps Marigold make up with Dale.[52]

When Emily created a sexy Coffee of Doom uniform and has Dale model it,[53] Marigold becomes possessive of Dale, wanting him to change out of the uniform lest some random woman try and steal him away.[54] She then talks herself down, explaining that she'd been reading wiki articles to learn how to be a better grownup.[55]

May had trouble with her leg falling off, and Dale and Marigold help pop it back into place.[56] They offer to assist May in financing a replacement body, which she declined, saying that the AI rights nonprofit had been trying to assist her, but she was pessimistic about it. Marigold offers to hug May, and May accepts. May admits that Marigold's boobs are incredibly soothing.[57]

Before the events of Questionable Content, Marigold was very unlucky in the art of love, stating that she had never even had a date, let alone had a boyfriend.[58]

She had been cultivating a friendship with Hannelore,[59][60] who may be her best human friend. Her best friend overall, however, is her companion robot.[61]

When Momo has genuinely expressed interest in getting a new chassis, Marigold put her concerns about the cost aside and surprises her with a trip to Idoru to purchase one.[62] She wanted to make sure that Momo is comfortable and freely offers her an additional room if she wants it.[63]

Marigold has a lot in common with Dale, but she has "philosophical differences" with him about video games.[64]

Marigold has some confidence and self esteem issues,[65][66] most of stemming from her physical appearance and lifestyle.[67][68] She wishes that boys would find her attractive and pay attention to her. Despite this, she seems rather reluctant to put effort into improving herself[69] and vehemently defends her habits.[70][71] She often needs a little push in the right direction from her friends; both Hannelore and Momo are concerned about her eating[72][73] and sleeping,[3][74] and try to keep her from playing video games for too long.[75]

She tends to assume the worst about how other people see her,[76][77] frequently assuming that they're patronizing or making fun of her if they offer her compliments or genuine concern.[78][79] She has trouble acknowledging that other people might find her attractive,[80] and is unaware that they do.[81][82][83]

She is very socially awkward,[84][16][85] largely owing to bullying[86] and a lack of social interaction in her younger years. Marigold has a very low level of self-awareness[87] and has a propensity to blurt out things that may unintentionally come across as insensitive or insulting.[12][88] She sometimes catches herself, however, and will make a dramatic fuss over her own faux pas.[89][90] In general, she seems to be very hard on herself.[91]

Much like with her appearance, Marigold seems less than content with her paucity of a social life outside WoW,[92] and while she enjoys socializing,[93] she is frequently reluctant to abandon her more introverted hobbies and often has to be pushed into social situations.[21][4]

Her personal hang-ups aside, Marigold tries her best to be a good friend. She is appreciative of people who try to help her[94] and wants her friends to be happy, even if it means putting her own needs and feelings aside. For example, even though she had a crush on Angus and was hurt to find out that he was interested in Faye, she went out of her way to have the two of them patch things up after a silly argument.[95][96] and showed her support of their relationship and personal happiness.[97]

She often seems rather easily amused and excited about little things,[98][99][100] although she can take her hobbies quite seriously.[101] This was particularly true about WoW and her rivalry with Dale.[33] Recently, she has been getting better at voicing her thoughts and playfully teasing her friends, though they're not always appropriate.[102]

Her hobbies caused her to seclude herself in her room for long periods of time, and she developed a disregard for personal hygiene.

Despite an unhealthy diet Marigold has no major current health problems. Her medical history includes a broken coccyx.[35]

Sex and drugs and Rock & Roll[]

Marigold has begun drinking alcohol since joining the QC social circle, and was quite unfamiliar with it prior to that.[22][111]

Marigold has not shown an interest in music and has been known to leave the room when others started discussing a band.[112] She does not like MC Hammer, though she doesn't quite recognize his musical style.[113]

However, she has listened to Daft Punk's latest album.[114] 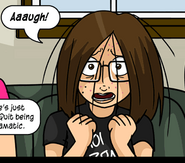 Marigold freaks out in Number 1417: Secret Weapons as Hannelore cleans her room.

Marigold, dressed up for a party in Number 1685: Fifteen Minutes. 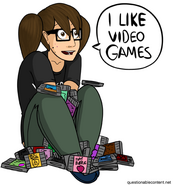 From Jeph Jacques's Tumblr, from the lakeside party 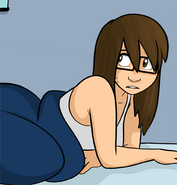 From Jeph Jacques's Tumblr, August 2013. He says it's the cutest Marigold ever.

Fanart from Jeph Jacque's Tumblr, of Marigold at a desktop

There has been considerable debate on the Questionable Content forum about whether Marigold is genuinely indifferent to others, or just inexperienced and clueless. Her detractors point to a paucity of cases of Marigold being generous, compared to Marten or even Pintsize. Supporters adduce her sharing experiences and items from her collection with Hannelore. The option with the most votes in a poll about her character was "Trying to be good but not sure how".

Marigold has mentioned her father (who has since appeared in the strip)[13] but there has been no word in the comic about her mother. If she had an absent, dead, or neglectful mother that deprived her of an early role model for being female, some of her problems could be explained. "Dead" can be ruled out by her mention of "parents" in one tweet, since Twitter is canonical.[120]

Community content is available under CC-BY-SA unless otherwise noted.