Female
Ellen was Steve's girlfriend during the earlier strips of the comic. They had a few problems in their relationship, such as Ellen being underage when they met.[1]

She attended Smif College, majoring in marine biology with a minor in philosophy.[2] She worked as a waitress when she first appeared. She shared an apartment with Natasha.[3]

Jeph Jacques has said that she has been written out permanently.[4]

Ellen was straightforward and somewhat naive.[5]

Ellen appears to be exclusively heterosexual,[6] and thoroughly committed to dating inside her own species.[7]

Ellen was known to listen to They Might Be Giants and Ben Folds.[9] She intensely dislikes Animal Collective and Slipknot.[10] She had a general fondness for musicals.[11]

Ellen wants to move faster in her relationship with Steve which almost causes them to split up.[13]

After accepting a position on a deep-sea research vessel, Ellen is unwilling to try a long distance relationship and breaks it off with Steve.[14][15] 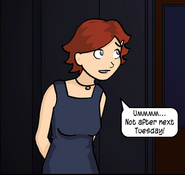 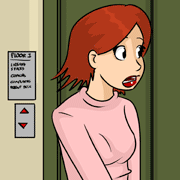 Ellen in her last appearance in Number 789: Animal House.