@dorabianchi
Dora Bianchi is the owner of Coffee of Doom, where Penelope, Cosette, Hannelore, and Dale work, and where Faye and Raven previously worked. She was Marten's girlfriend, but is now engaged to Tai Hubbert.

Dora is an ex-Goth[1] and computer enthusiast.[2] Despite her interest in computers, she does not have an AnthroPC, but instead owns a stuffed bunny named "Boo-Boo"[3] and one of the living pets in the comic, a cat named Mieville.

Dora is of Italian and Swedish ancestry, and is a native of Northampton[4]. Her parents are Peter Bianchi and Elssa Bianchi. She has an older brother named Sven who writes country songs, whose effortless successes she envies.[5] She does not have a sister.[6] She has an 8-year-old male cousin,[7] her only male cousin. She also has an aunt named Hilde, who Sven describes as "cantankerous".[8]

Dora's current beliefs have not been explicitly mentioned but Jeph Jacques has said "It's safe to assume that Dora was raised Catholic".[9] She was in a "coven" with Raven but dropped out of that early in the comic's timeline.[10][1] She does not identify as a witch (at least any longer).[11]

Dora went to St. Agnes's High School[12] with Agent Turing and attended college. Her major is unknown but her studies included at least one economics class.[13]

Her performance in school was undistinguished.[5] She states she was "never very good at algebra."[14]

Dora lives in an apartment in Amherst.[15] She has no roommate. Her apartment has two stories and an eastern exposure.[11]

Dora has been self-employed for a couple of years[16] and out of college for four. Her prior regular jobs were at coffee shops,[17] which led her to start and run her own, Coffee of Doom.

This section is a stub. You can help Questionable Content Wiki by expanding it.

Dora had some doubts that Marten might still have feelings for Faye, and she asked Makeout Hobo for advice after Raven's suggestion.[20]

After breaking up with Marten she moved in with her brother, Sven for a short period of time.[23] Dora moved to Amherst with help from Sven, Faye, and Tai,[24] much to dismay of her employees.[25]

After Sven told Faye that he's in love with her, Dora decided to cut him out of her life.[26]

After some convincing from Tai, Dora decided to make up with her brother.[27]

After Faye was fired from Coffee of Doom, Dora has been working more hours than usual.[28] After a frustrating conversation with Tai, Dora promoted Penny to assistant manager, gave Dale more hours, and hired Emily by accident.[29][30][31]

After a discussion of Dora's plans to move with Tai if she got a new job elsewhere, Tai proposed to Dora.[32] Dora said yes.[33]

Dora suggested to burn the bridal magazine in a ritual, after Tai realized that it made her plan for wedding paraphernalia what she didn't actually want.[34]

Dora was suspicious of Hannelore hugging her when Ms. Ellicott-Chatham returned from her travels.[35]

She says she is angsty[36] and has social anxiety,[37] but is outwardly one of the more confident characters.

Occasionally, in the context of relationships, she betrays deep insecurity. This repeatedly takes the form of lashing out at those close to her.[38]. She has, quite possibly related, control issues.[39]

This might stem from her turbulent teenage years, where she admits to having felt overshadowed by her brother in many aspects of life.[40]

Her brother has accused her of being routinely "all selfless to your own detriment".[41]

She has, however, said vehemently that she is currently not interested in having children,[48] referring to them as "awful mewling little poo-larvae."[49] She doesn't even think she would be a good mother.[50]

She has said she wouldn't want to work for someone else again,[51]and her entrepreneurial reactions are reflexive.[52]

She has sought out therapy, though she was somewhat coerced.[53] She's frustrated that it all seems to be about one thing, though.[54][55]

Dora is bisexual.[56] Most of her known relationships have been with men but she is currently engaged to Tai.

She has previously expressed a sexual interest in Faye,[57] and made the occasional move on her.[58][59][60] She has also fantasized about Hannelore.[61]

Dora initially expressed strong opposition to urolagnia[62] (sexual arousal from urination), even going so far as to subject Marten to a formal questionnaire to confirm it was not a kink of his, (in response to having it sprung on her from a previous relationship), but further into their relationship she seemed more receptive to the idea.[63] Of course, it's also possible that SHE was the one that sprung it on someone else, and the questionnaire was intended to see if Marten was okay with it.

Dora drinks caffeine and alcohol, though her alcohol tolerance is somewhat less than Faye's.[64] Despite (or because of) her parents's enthusiastic marijuana consumption, she is not an obsessive user but has been known to take part.

She considers Homework to be Daft Punk's best album.[73]

She plays The Cure in her coffee shop as a compromise between what the customers can take and what she enjoys. For intimate times, she plays Slayer.[74] She considers David Bowie's work sexy.[75]

Since the strip began, she has come to like the Flaming Lips, about the only taste she shares with Marten.[76]

She has an intense dislike for the band Toto,[77] foreshadowing her relationship problems with Marten. She seems to have a poor opinion of Colin Meloy.[78]

Dora is skinny and a thick-haired[79] natural blonde[80] who dyes her hair black (purple between strips Number 1670: She Gets A New One Every Three Months and Number 1837: Leave House). She has scars on her right butt cheek as a result of mooning a dog (on a dare from Sven).[81] She was distressed earlier in life by her small bust size.[82]

At various times, Jeph Jacques has posted pictures of live people he said looked like his mental picture of Dora. The first, long ago, looked like a spiky-haired Winona Ryder. The most recent was one of the servers at Rao's Coffee Roasting Company in Northampton, as seen in the gallery below.[83]

Dora has plug earrings, which are known to make her ears smell.[84]

Dora's backstory to date may not be enough to explain her insecurity and jealous rages. There may be more bad experiences in her past that will be revealed later, though she does attribute a lot of her personal conflicts to her lifelong rivalry with her older brother, often feeling overshadowed by his actions in many aspects of life.

This inferiority complex may have either been the root of her turn to the gothic lifestyle. She told Marten that she is was angsty and conflicted when becoming a Goth ("because people are retarded").[119] She is still just as angsty and conflicted as she was during the height of her involvement in the culture. This would theoretically explain quite a lot about Dora's history. For example, she once mentioned that Sven always got better grades in high school, and despite Dora owning her own business, a feat that not many young adults her age can boast, she still feels second best to Sven who makes money composing music , which supplies him with more money and more free time than Dora has. This suggests that while she "grew out of" the culture, her insecurities were not generated by the stereotype but rather genuine feelings of inferiority which drove her to act out in such a way during her youth.

She also mentions that she feared that many of her friends only hung out with her because they wanted attention from Sven.[5] This might explain her reaction to Faye dating Sven. This may have contributed to her accusations against Marten when he comforted Faye. Dora's insecurity, further fueled by the past situations concerning Marten and Faye, could explain her reaction, though not fully.

Dora's therapist has identified a pattern of excessive need for control.[120] That's also a pattern seen in adult children of alcoholics, who are trying to compensate for their parents's failure to provide order. If her mom and dad's drug use and adventuring interfered with her upbringing, she may be suffering the same kind of injury.

Dora's Twitter avatar (when she grew out her hair) 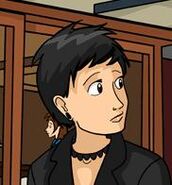 Dora's professional look from Number 1515: A Glimpse Into The Future to Number 1521: Required At Every Karaoke Night

Barista at Rao's in Northampton, who gave Jeph permission to post her picture.

A teenage Dora and her mother, Elssa, in a family photo.