@cosetteisclumsy
Cosette Hurlbut[1] is a student at Smif College and Steve's current girlfriend. Her major is unknown but she has taken at least one course in comparative literature[2] and one in sociology.[3]

The first job we saw Cosette in was as a waitress in a pasta place.[7] She recently got a job at Coffee of Doom.[8].

Her most recent job before working at Coffee of Doom was at an ice cream parlor.[9] Other employment included Fondue Hut, Mambo Juice, and Video Hut.[5] Every place she worked before Coffee of Doom has gone out of business, some because of legal trouble; Dora was concerned that she might be cursed. However, a witch Dora knows concluded otherwise.[10]

In her first appearance it apparently took Cosette a long time to get the nerve to ask Marten out. When he revealed he was already seeing someone, she was devastated.[11] Unfortunately, she tried to "drown her sorrows" at Coffee of Doom, where she met up with Dora — who was none too happy to find out she'd hit on her boyfriend. The piece d'resistance of the whole first story arc was when Marten and Dora went out for "makeup pasta", and their waitress was Cosette.[7]

After the rejection by Marten, she later found out about Steve.[12] She finally met him when Steve was trying to track her down.[13] After going out on a date, Cosette ended up in the hospital—due to some rather interesting circumstances.[14]

Cosette and Steve were visited by Tortura, who threatened Cosette not to break Steve's heart.[15] 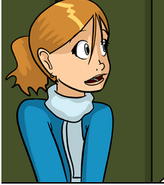 Cosette in one of her earliest appearances.