View source
watch 01:54
Obi-Wan Finale - The Loop
Do you like this video?
Play Sound

@ClaireAugustus
Claire Camilla Augustus[1] is a 24-year-old[2] graduate student[3] in library sciences[4] interning at the Williston Library of Smif College. She is sister of Clinton Augustus, daughter of Aurelia Augustus, and current girlfriend of Marten Reed.

She is Clinton's sister[5] — not that she's particularly fond of the fact.[6] They are not twins.[7] They seem to be close and supportive underneath the squabbling and teasing. Their parents are divorced,[8] and Claire has no contact with her father.[9][10]

Claire lived with her mother at 221 Elm, before moving in with Marten.[11] Claire has an undergraduate degree, and her graduate studies are supervised by Dr. Amelia Borogrove.[12] In addition to her studies, Claire also works as a teacher assistant.[13]

Claire is an intern at Smif College's library, along with Emily and Gabby.

Claire wants to be a librarian and she likes books, too.[14]

After one night drinking,[15] Claire started dating Marten.[16] Faye took the news pretty well, despite her recent break up with Angus.[17] Later, Claire moved into Marten and Faye's apartment, after realizing that she already spends most of her time at his place.[18]

She has been stressing out about her comprehensive exams.[19] Claire talked to Clinton about it, but has been hiding it from Marten.[20] Pintsize helped Marten and Claire talk about her stress.[21]

After the exam finally happened,[22] topic of job opportunities for Claire came up.[23] After initial confusion and with some help from Faye, Marten realized that he was ready to move if needed.[24]

Claire rejected Pintsize's proposal to hack into university systems to find out results ahead of time.[25]

After finishing her exams, Claire searched for a job. She went to apply at a sex toy factory, but the position had already been filled.[26] When Dale left Coffee of Doom to do "web stuff" for Marigold's streaming career, she was offered and accepted a job as a barista there.[27]

She tends to be a bit high-strung about her internship,[4] and jumped to the conclusion that the inept way Marten showed them around the library was "some kind of weird hazing ritual."[28] This may have been representative of a general tendency to jump to conclusions.[29].

Claire makes a conscious effort not to judge others' actions. However, she can react strongly to infidelity due to the past emotional trauma her father's actions caused and possibly due to jealousy.

She is good at taking things in stride in other circumstances, though, for example meeting Marten's family and even Pintsize.[30]

Claire has a spontaneous sense of humour and enjoys making puns based on things other people are saying and doing. She generally gets a poor response to her attempts. This clearly frustrates her as she often puts considerable effort into them. The only major character to laugh at her puns has been Emily Azuma and there is in-strip evidence that she didn't even understand the terminological reference Claire used to make the pun.[31]

She sometimes messes with her brother Clinton, but she does care for him. She has helped him towards figuring out his sexuality.[32]

Sex and drugs and rock & roll

Claire is a transgender woman. She started transitioning in college, and has been on hormone-replacement therapy since then.[33] She is the first known transgender character to appear in QC. Jeph revealed that he was nervous about revealing this fact, as he has wanted to include a trans character for years, but wanted to execute it properly.[34]

Claire is attracted to men.[35][36][37] Prior to meeting Marten she had little romantic experience. She told Emily that she's never been kissed before,[38] and later told Marten that going out to dinner with him is her first date.[39] Claire was a virgin until she slept with Marten.[40]

Claire was seen drinking alcohol, and she seems unused to it,[41] and this has sometimes caused her brother to worry about her safety.[42] However, she seems to have developed a taste for scotch, being able to place the subtle flavors accurately.[43] Claire's first experience with marijuana caused her a panic attack.[44] Later, she smoked with her mom and Tai and had a good time at first, but smoked a bit too much.[45] During their trip, a dog wandered into the house. They named her Cosmo.[46]

Her musical tastes are eclectic but include the indie band Low[47] and the Smiths. She vehemently dislikes at least one techno piece.[48]

Claire's character is somewhat unusual in that Jeph had been sketching her out for some time prior to introducing her in the comic.[49]

Marten is aware of her gender history (as are Emily, Bubbles, Faye, and Pintsize), and was her supervisor at the library. It will be interesting to see Jacques explore (or have his characters explore) this relationship. Marten and Claire kissed and told Hannelore and Tai about their relationship. Tai has then told everyone she knew in Number 2824: Dang Dang Dang.

Claire wore the transgender flag on her T-shirt at Cafe of Doom in 4820: The Convergence; it is possible that this is the first time she's implicitly come out as trans to the world.

Marigold lives at an apartment whose street address is 14 Elm Grove Lane whilst Claire formerly lived with her mother live at "221 Elm". It is possible that this is the same street although this has yet to be confirmed.

A fan (Josh Bryant, aka "Su1c1deK1ng") noted on Twitter that Claire may be an unintentional copy of a character in Calvin and Hobbes.[60]

Claire looks at the dress she bought for Henry Reed's wedding in Number 2389: Neckties Optional 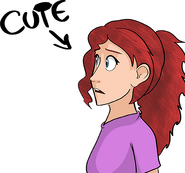 From Jeph Jacques's sketchbook, before he knew who Claire would be.

Another early sketch before she appeared in the comic

From Jeph Jacques's Tumblr, Claire's expression when springing a pun on someone.