Number 375: And A Shot Of Bitchiness

Male
Angus McPhee is regular patron of Coffee of Doom, while he originally didn't drink the coffee[1] (but has started)[2] he does talk to Faye a lot and has feelings for her. He was originally unnamed and only known as Argument Guy until an encounter in a bar had his identity revealed.[3] He has since been shown to live with a room-mate named Marigold at 14 Elm Grove Lane, Apartment 8 in Northampton and has developed a closer relationship with Faye.

It is revealed that he knew Marigold from college not just as a shut in but as a person and was concerned about her well-being.[4]

Angus is employed as a professional strawman, paid to deliberately lose political debates by the opposing side.[5]

Angus attended a fancy prep school.[6] at which he played baseball,[7] and went to college with Marigold. His major is unknown.

The only thing known about Angus's early history is that he apparently came from a wealthy family.

Angus is lactose intolerant[8] and possibly allergic to cats.[9] He used to wear glasses, but one of Hannelore's screaming outbursts was so intense, it literally cured his eyesight.[10]

Angus drinks caffeine and alcohol. He smoked weed in college,[11] but it is unknown if he still does.

Some of Angus's taste in music conflicts with Faye's.[12] He likes James Taylor, which Faye finds hilarious. However, both of them like Toto and, more specifically, their song "Africa".[13]

Angus is one of the most complex characters in the strip, capable of both supportive friendship and damaging faux pas,[14] a trait he seems to share with Faye.

He can be sentimental.[9]

Until recently, Angus was dating Faye. He has generally been supportive of her, even when he's at fault.[15] They broke up when Angus got a job in New York City.[16] Before dating Faye, He used to date Renee.[17] 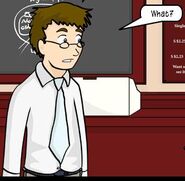